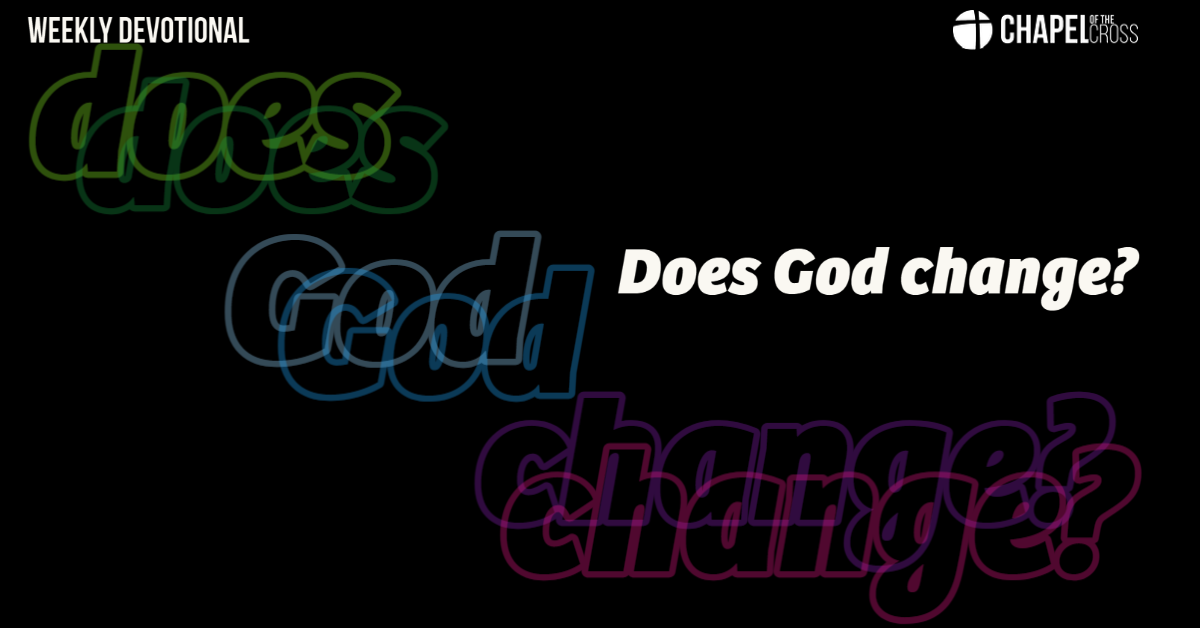 In Chapel Kids programming, the children have been studying the Old Testament, which prompted correspondence with parents on the ways we can teach some of the more violent passages in the Old Testament without completely terrifying the children. However, as a conversation continued with a parent, the realization is that many adults still struggle to reconcile this wrath of God with the great love of God.

Often people will question things like, “How can a loving God want to destroy so many people?” Which leads some to go on to conclude, “Well, you know God is different in the Old Testament. God changed in the New Testament when Jesus came.”

And that brings me to a faith-building question you must ask yourself. Do you believe that God or God’s Word is contradictory? Or that God changes?

Let me tell you this – that conclusion that God was different or had changed between Old and New testaments is absolutely not based in truth. Malachi 3:6a could not be more clear: God does not change.

He isn’t some wishy-washy god who can be manipulated or cajoled. He isn’t moody or grumpy. He doesn’t have bad days that He takes out on others. He doesn’t suffer from PMS or a personality disorder. God is the same now as He was then, and as He forever and always will be.

That lie that God changed or is different from Old Testament to New Testament is something many tell themselves because of the human need to make sense of everything. We expect or need God to yield to our limited understanding of Him. God chided in Isaiah 55:8-9 that His intentions are not always ours, that He does not go about things as we do. His thoughts and His ways are above and beyond us.

That is a theme that Paul continued in 1 Corinthians 1:18, for people who are stumbling toward ruin, God’s message is nothing but a tall tale for fools written by a fool. But for those of us who are already experiencing the reality of being rescued and made right by God, God’s Message is nothing short of God’s power.

So if we accept that God does not change as His Word proclaims, how can we reconcile His Wrath with His love? And the truth is because we are so limited in our understanding of Him, maybe we just can’t wrap our brains around it on this side of Heaven.

When we read in the Old Testament of the extreme violence waged against other nations, we can remind ourselves of how lost those kingdoms were. Infant sacrifice, sexual prostitution in their worship of their meaningless gods, and nations' hearts that were hardened against the Lord our God. These pagan cultures served as a wedge between God’s chosen people and God, over and over again.

One of my daughters had head lice once. Though I thought I was thorough in treating it, I must have left one of those boogers behind. A week later we were dealing with another infestation. I needed to get rid of them all. Not one could be left. In the same way, God’s wrath against evil flowed from His love for His Children. Wouldn’t you do everything you could to protect your child against evil?

To establish the connectivity between Old and New, consider Psalm 110:1 and 1 Corinthians 15:24-25. Because in those verses we see how the Old and New Testaments uphold one another, rather than contradict one another. Just as Joshua through God’s power and might conquered their enemies in Canaan, so too will Jesus Christ conquer His enemies when he returns to set up His kingdom on earth.

Jesus will shut down every rule and authority that vies for power. All powers hostile to God will be eradicated and destroyed by Him. The message is clear and consistent: There is no room for evil in the kingdom of God. No room for evil.

It’s so important for us to approach the Old and New Testament, not as two separate books of the Bible but as one continuous story – and it’s a love story.

God’s Wrath against evil is all a part of the continuous love story between Him and His children. That same wrath against our own sin was poured out on Jesus as He was nailed on the cross. Through His sacrifice, God’s wrath over our sin was abated. The evil of sin that separated His children from Him was annihilated. Completely destroyed. And why did Jesus go through all that? Because HE LOVES US.