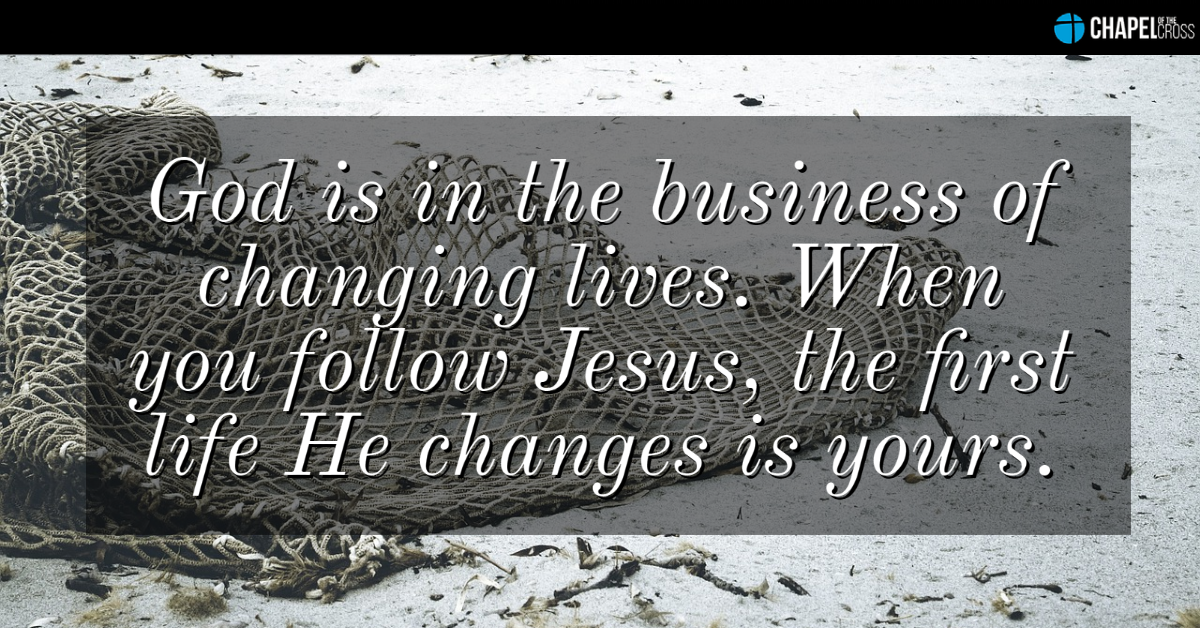 As we begin our journey through the Gospel of Mark, Mark didn’t spare any time giving the details of Jesus’s beginnings and birth, but instead, he went straight to the point and introduced his readers to who Jesus is. Chapter One reads with a flurry of activity but one of the passages that particularly strikes me is the calling of the disciples.

As he passed alongside the Sea of Galilee, he saw Simon and Andrew, Simon’s brother, casting a net into the sea—for they were fishermen. “Follow me,” Jesus told them, “and I will make you fish for people.” Immediately they left their nets and followed him. Going on a little farther, he saw James the son of Zebedee and his brother John in a boat putting their nets in order. Immediately he called them, and they left their father Zebedee in the boat with the hired men and followed him.” Mark 1:16-20 (CSB)

As I read and re-read these verses, there is so much to chew on. One, these disciples were ordinary, everyday people. They had no special training in ministry. They likely were not wealthy or highly educated. They were simple, ordinary people just trying to make a living. And these were the people whom Jesus called.

I am also struck that Jesus was the one who initiated the interaction. He called out to them, told them what they wanted them to do, and they “immediately left their nets” to follow Him. That little nugget is so convicting!

How many times have I sensed the nudge of Christ to follow Him, to do something on His behalf, and I hesitated? Instead of immediately leaving “my net,” I became tangled in it! God, you can’t possibly want me to do that! Then I pull from any number of excuses I have in my back pocket.

I am not qualified…
I don’t know the answers…
I don’t have the time…
I am already doing this other really important thing…
Can’t someone else do that?
That’s the pastor’s job.

You get the picture, right? Maybe you can even relate?

Thankfully, I know my God is forgiving for both my moments of hesitation and even downright disobedience. But I am still inspired by the call of Christ to ordinary people and by their response to His calling. Prayerfully, I believe we all should be praying that we are sensitive to hear what God is calling us to do and for the obedience to respond to that call.

But one other thing I want to point out is that as we read through the Gospel of Mark, we are going to read of times when Jesus’ disciples, His followers, make mistakes too. As the disciples followed Jesus, Jesus was refining them, strengthening them, equipping them along the way.

That process of being shaped and equipped by God often happens gradually and progressively. It doesn't happen by reading a list of things we should eliminate from or add to our lives. It happens by getting to know Jesus and following Him wherever He leads. As we fall more deeply in love with Him, as the hymn writer says, "The things of earth will grow strangely dim, in the light of His glory and grace." His Spirit working in us does the clean-up job. He lovingly enters the dark places of our lives and fills them with life and beauty.

You see, God is in the business of changing lives.

the first life He changes is yours.

Ask Him right now for the courage to follow Him without counting the cost. Thank Jesus today for the benefits you have experienced because of following Him.

Weekly reading: Read Mark Chapter One. As you read, notice this dichotomy of who Jesus is. Though Jesus has all the power and authority of God, He took the posture of a humble servant. Reflecting on Mark Chapter One, target one area you need to grow to be a servant who is more like Jesus. What is that area? What could you do to “make your mark”?

Compassion Is a Decision